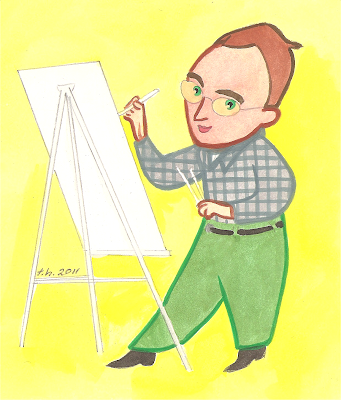 Hi, and welcome to my blog!

My name is Terence Hanley. I am an artist and a writer interested in cartooning, illustration, art, literature, history, and popular culture.

I have been drawing for as long as I can remember, but I didn't begin publishing my work until 2009 with my first coloring book, Mothman, Aliens, and Flying Saucers.

As you might guess, I like monsters, aliens, mythology, science fiction, fantasy, and superheroes. I have several books in print. I'm working on several more and hope to create and publish at least a couple of new books every year.

Here's what I have so far:


I drew this coloring book in 2009 for my first Mothman Festival, held every year in Point Pleasant, West Virginia. It's entirely hand-drawn, with a hand-colored front cover and a hand-painted back cover. Inside you will find sixteen pages to color, every one of them featuring an alien or creature, plus lots of flying saucers. Every picture is based on a supposed real sighting. You can read more about them in the notes for investigators inside!


This is my second coloring book, completed in time for the Mothman Festival in 2010. As you can see, it has a brightly colored wraparound cover, hand-painted as before. You'll find every one of the monsters and creatures from the cover inside as well, sixteen pages in all. There are more notes for investigators, so you can look into each case on your own!


Here it is, my first new coloring book since 2012, recognizing the monsters and aliens of the Appalachians and the Ozarks! Once again, there are sixteen pages to color, plus top secret notes for investigators, and nine trading cards on the back cover featuring prominent UFOlogists and cryptozoologists.


Lucky Girl #1 is my first comic book drawn for publication. Lucky Girl made her debut at the Small Press and Alternative Comics Expo (S.P.A.C.E.) in March 2011. Just who is Lucky Girl? Well she's a girl like any other except that she likes to investigate crimes and solve mysteries. The first issue includes two stories, twenty pages in all. I have started work on the second issue and plan to have it in print in 2013!


In 2010 I began working on a comic book project with some other artists and writers. Five Star Comics, printed in 2011, is the result. There are five stories in this book, each starring a public domain character from the Golden Age of Comics. I wrote three of the stories, drew two stories on my own, and helped draw a third. The lineup of this 37-page, black-and-white book:


The reaction has been great. Everyone who has seen it and read has loved Five Star Comics #1. We sold out of the first print run and now have a new batch of comics for sale.

We completed our second issue of Five Star Comics in 2012. Once again, there are five stories featuring five different characters drawn by five different artists. Here's the lineup:

If you would like to order any of these books, send a check or money order and a list of items you're ordering to:

or contact me by email at info@hoosiercartoonists.com to arrange payment. I will combine shipping, so if you order any number of books up to 10 in all, the shipping is the same: $2.00.

All text and artwork copyright 2012 Terence E. Hanley.
All rights are reserved.

Terence E. Hanley
I am an artist and writer, an illustrator and cartoonist, and I like to create and publish my own books. I'm always glad to talk to other artists and writers. Feel free to contact me.