If you have ever tried to keep up a blog, you know how hard it can be. I have been trying to keep up six blogs and have finally decided enough is enough. Beginning today, you can read about Hoosier Cartoonists on my blog, Indiana Illustrators, at this link. I have retitled that blog Indiana Illustrators and Hoosier Cartoonists, but the URL is the same as before. The featured artist today is Dick Wingert, creator of Hubert.

Thanks for reading. If you have any questions or comments, you can reach me at: 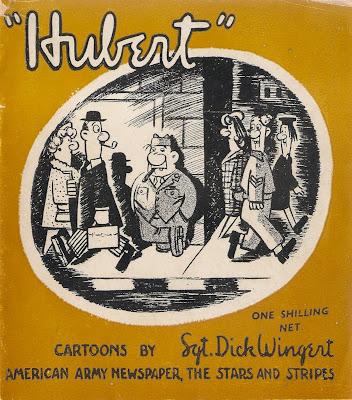 Phil Harris (1904-1995) was a Hoosier. His hometown, Linton, Indiana, proudly claims him, even if he did leave behind the name he was given at birth. Can you blame him? Would you want to go through life with a handle like Wonga? That's his real-life wife, Alice Faye, looking on in disapproval as Phil reads Whiz Comics behind the cover of a dictionary. Whiz was the home of Captain Marvel, the original Fawcett superhero whose looks were based on Fred MacMurray's. Harris acted in movies and on radio for decades. In the late 'sixties and early 'seventies he lent his voice to Walt Disney and played Baloo in The Jungle Book (1967), Thomas O'Malley in The Aristocats (1970), and Little John in Robin Hood (1973). In The Aristocats, Harris sang a duet with Scatman Crothers, another Hoosier and a topic for another day.


Once, many years ago, children read comics. Here's a picture of just such a scene, taken from a book called A Nation of Nations by Louis Adamic (1945). Adults read comics, too, of course, although some may have looked upon comics the way this Greek grandfather seems to be looking at his granddaughter and her curious American habits and tastes.

That's Dick Tracy on the front page and Little Orphan Annie on the back. Both were syndicated by the Chicago Tribune-New York Daily News Syndicate. The paper says "Sunday News." Maybe the paper is in fact the New York Daily News. An assiduous researcher might even be able to figure out the date. I should point out that Harold Gray, the creator of Little Orphan Annie, though born in Illinois, grew up in Indiana and graduated from Purdue University. Few cartoonists in history have had more words written and spoken of him than Harold Gray.

Today is the birthday of the "Hoosier Bard," James Whitcomb Riley (1849-1916). Born in Greenfield, Indiana, on October 7, 1849, Riley was one of the most popular poets of his time and contributed to what is called the Golden Age of Indiana Literature. Another contributor was Frank McKinney "Kin" Hubbard (1868-1930), creator of Abe Martin. Hubbard would have objected to being called a cartoonist, for he preferred the term caricaturist. Nonetheless, I would like to remember the two on the anniversary of Riley's birth with a poem Riley wrote in praise of Hubbard and his just-barely fictional character Abe Martin.

Abe Martin!--dad-burn his old picture!
P'tends he's a Brown County fixture--
A kind of a comical mixture
Of hoss-sense and no sense at all!
His mouth, like his pipe, 's allus goin',
And his thoughts, like his whiskers, is flowin',
And what he don't know ain't wuth knowin'--
From Genesis clean to baseball!

The artist, Kin Hubbard, 's so keerless
He draws Abe 'most eyeless and earless,
But he's never yet pictured him cheerless
Er with fun 'at he tries to conceal,
Whuther on to the fence er clean over
A-rootin' up ragweed er clover,
Skeert stiff at some "Rambler" er "Rover"
Er newfangled automobeel!

It's a purty steep climate old Brown's in;
And the rains there his ducks nearly drowns in
The old man hisse'f wades his rounds in
As ca'm and serene, mighty nigh
As the old handsaw-hawg, er the mottled
Milch cow, er the old rooster wattled
Like the mumps had him 'most so well throttled
That it was a pleasure to die.

But best of 'em all's the fool-breaks 'at
Abe don't see at all, and yit makes 'at
Both me and you lays back and shakes at
His comic, miraculous cracks
Which makes him--clean back of the power
Of genius itse'f in its flower--
This Notable Man of the Hour,
Abe Martin, The Joker on Facts.

Art of Hoosier Cartoonists Goes on Display in Wisconsin


The Kenosha Public Museum of Kenosha, Wisconsin, is hosting an art exhibit called “More Than Funny: Cartoons and Comics From the Kenosha Festival of Cartooning.” The exhibit will run through Saturday, September 29, 2012, and includes work by Indiana cartoonists John Hambrock, Dave Coverly, and Michael Jantze, among others. A blog called "KenoWi" carried the story of the exhibit and of Mr. Hambrock in "John Hambrock at the Kenosha Public Museum," a posting of September 9.

John Hambrock, creator of the daily comic strip The Brilliant Mind of Edison Lee, was born in Fort Wayne, Indiana, and like Dave Coverly (Speed Bump), attended Indiana University. Mr. Hambrock received a degree from the Ringling School of Art and Design. (Cartoonist and fine artist Rob Harrell, creator of Big Top, also went to the Ringling School.) Before becoming an artist, Mr. Hambrock aspired to a career in marine biology, which happens to have been the vocation of SpongeBob SquarePants creator Stephen Hillenberg. In any case, marine biology's loss is cartooning's gain. (Mark O'Hare, one more in a seemingly endless list of Hoosier cartoonists, has also worked on SpongeBob.) In addition to drawing a syndicated comic strip, John Hambrock works in advertising. Among his clients is Keebler, maker of cookies and crackers. (If I can squeeze in just one more parenthetical statement and one more Indiana connection, the Keebler Elves were co-created by advertising executive William Harty, an alumnus of the University of Notre Dame.) Check out the blog posting, and if you live close enough to Kenosha, check out the exhibit, too.

Traces, the magazine of the Indiana Historical Society, has published a biographical article on Bill Holman, creator of the comic strip Smokey Stover, in its Summer 2012 issue. The eight-page article includes three full-page photographs of the Indiana cartoonist, plus several pieces of his art. Holman's zany strip ran in newspapers for almost forty years. Few readers of Smokey Stover could have known that the physical violence visited on Smokey, Chief Cash U. Nutt, and the strip's other characters probably originated in Bill Holman's own life story. You can read more in "Foo! Bill Holman and Smokey Stover" by Terence E. Hanley in Traces of Indiana and Midwestern History, Summer 2012. To order a copy or a subscription, go to the website of the magazine and the Indiana Historical Society, here.

In the News-Tom Armstrong and "Marvin"


Thirty years ago this week, readers of the nation's newspaper comics got their first look at a chubby little baby with a mop of red hair and a sly and knowing look on his face. The baby was and is named Marvin and he was created by Evansville native Tom Armstrong. When Marvin began on August 5, 1982, Mr. Armstrong and his wife were "a struggling couple living in Indiana." Now Marvin appears in 300 newspapers and the little red-haired baby was recently added to the attractions at Universal Studios Toon Lagoon in Orlando, Florida. You can read more about Marvin in an article entitled "Nationally Syndicated Cartoon Strip 'Marvin' Turns 30" by Richard Dymond, dated August 3, 2012, and appearing on a number of websites, including that of the Kansas City Star, here.

Terence E. Hanley
I am an artist and writer, an illustrator and cartoonist, and I like to create and publish my own books. I'm always glad to talk to other artists and writers. Feel free to contact me.